Uranium is a silver colored metal that is radioactive and can be found in small amounts in soil, rocks, and water.  There are many kinds of uranium, but 99% of uranium found in nature is Uranium 238.  Uranium is not stable and it breaks down into radium and radon.  This process is called decay where alpha radiation is released.  High levels of uranium indicate the potential for radium and radon to be present, so it is important for water to be tested for those contaminants as well.

How Does Uranium Get In Our Water?

Uranium in drinking water is increasingly becoming a concern for many people, particularly in the Midwest and Western United States, but also on the east coast and scattered sites around the country as well as elsewhere throughout the world.  Uranium is found in the environment as a result of leeching from natural deposits, emissions from the nuclear industry, the combustion of coal and other fuels and the use of phosphate fertilizers that contain uranium.  According to a University of Nebraska Lincoln study, 78% of the uranium-contaminated sites are linked to the presence of nitrate, which through a series of reactions oxidizes uranium which makes it more soluble and capable of finding its way into groundwater.

Radioactive contaminants are typically inorganic and can be naturally occurring or man-made.  Some radioactive contaminants have been linked to cancer.  Uranium is known to be linked to nephrotoxicity and osteotoxicity.  The EPA (Environmental Protection Agency) has set the Maximum Contaminant Level, also known as the MCL, at 30 μg/L (which is roughly equivalent to 30 pico Curies per liter).  Unfortunately, Some areas and private wells exceed that limit. Source: http://pubs.acs.org/

The Central Valley Aquifer in California has uranium concentrations at 180 times the MCL, while the High Plains Aquifer, that lies under eight Midwestern states from South Dakota to Texas, has been tested at 89 times the MCL established by the EPA.  In California, it is believed that up to 25% of wells are contaminated.  Most states’ Department of Health list information on their websites about well testing and specific local issues that come up.  For example, in Maine they recommend testing for arsenic and radon if uranium is found.  Some states have state certified laboratories for testing that they recommend.  Even if you don’t own a well, reading about common local contaminants can be a real eye opener.

Health effects of ingested uranium are due to chemical effects and not to radiation.  The organ most effected by uranium is the kidneys.  In studies done on rats, uranium is absorbed into the muscles, skeleton, blood, lungs, liver and kidneys.  The half-life of uranium in humans under normal conditions is between 180 and 360 days.  Researchers at the University of New Mexico and Tufts believe that there can also be long term genetic and reproductive damage from long term exposure to uranium.  Not only is drinking water with uranium potentially dangerous, but eating root vegetables grown with contaminated water may also be harmful.  Most believe that bathing or showering with this water is not a health concern. 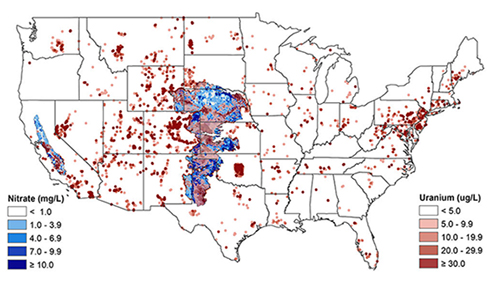 Yes.  Not only will distillation remove most of the uranium in your water, it also will remove other contaminants often found in the same regions such as arsenic and nitrates.  We have 3rd party test results for uranium and have found that our machines are able to remove over 99% of uranium found in water.  Distillation harnesses the natural processes found in the hydrologic cycle.  The water is boiled (causing evaporation), condenses (just as it does in clouds) and is collected into a glass jar (precipitation).  No other system such as reverse osmosis or deionization can produce cleaner water with less waste.