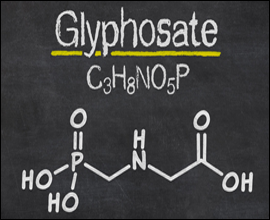 The first and most important thing you should know about glyphosate is that, if you have an AquaNui water distiller, your distilled water has had virtually all the glyphosate removed from it. See the test results here.

If you don’t have an AquaNui water distiller:

With increasing fear about glyphosate and Roundup contaminating drinking water and food, we turned to our resident expert Eldon Muehling to get you the information you need to know.

What You Need To Know About Glyphosate and Roundup

Glyphosate, which is the active ingredient in the world’s most widely used herbicide (Roundup), is also one of the most contentious of all herbicides. It was discovered by Monsanto’s chemist John E. Franz in 1970 and was brought to market in 1974. It’s chemical formula is C₃H₈NO₅P.

Roundup is a systemic, broad-spectrum herbicide that is used to kill annual, broad-leafed weeds and grasses. Systemic means that it is mainly absorbed through foliage and minimally through roots. It is then transported to the growing points of a plant. There, it inhibits a plant’s enzyme that is involved in the synthesis of three amino acids.

It’s important for those using Roundup to know that the plant must be growing for this herbicide to be effective and is therefore not effective as a pre-emergent herbicide.

Consumers must always be very careful to read the complete label when working with this or any other herbicide and follow the instructions for “safe” use. The effects are going to be subtle and accumulative over years of exposure.

Wear protective clothing, chemical-resistant gloves, and protective eye wear when applying Roundup or any other herbicide. Also, be careful not to apply herbicides directly to water. Remember: glyphosate can bind to soil particles in the environment, which can get into the watershed during heavy rainfalls and reach freshwater environments. Glyphosate vapors tend to drift on warm days and can cause unintended consequences in your garden or that of your neighbor! Be careful when, where, and how you apply herbicides.

Water testing shows that at least 70% of American household’s drinking water is positive for above detectable levels of glyphosate. The EPA MCL (Maximum Contaminant Level) for glyphosate in the U.S. is 700 ug/L. This limit was decided upon by the EPA based on the (now seemingly false) premise that glyphosate was not bio-accumulative. glyphosate does show up in mother’s milk at significant levels. Urine testing also show levels of glyphosate in U.S. citizens over 10x higher than in Europe where it is used less.

According to scientists at the University of Calgary in Canada, glyphosate is a small compound that has been sold as the active ingredient in herbicide formulations since 1974. It is promoted as having no effect in animals because of its design which is specific for plants. That design is to inhibit an enzymatic pathway required for protein synthesis – and thereby, inhibit growth of plants but not animals.

One of the reasons glyphosate is thought to be relatively safe for humans is that, as a molecule, it’s not soluble in fat. Thus, it will not accumulate in our bodies very easily after oral exposure. Some crops have been genetically modified to be tolerant to glyphosate and there fore are sprayed to eliminate weeds growing in their midst.

Nevertheless, there are concerns about how much glyphosate we might be eating. Epidemiological studies in humans do show some links between glyphosate exposure and subtypes of non-Hodgkin’s lymphoma. Those same studies also showed a weak association with acute myeloid leukemia.

American farmers and farmers from many other countries have relied upon glyphosate-based herbicides to kill unwanted vegetation for more than four decades, but its use sparked hefty debate in 2015 when the World Health Organization’s International Agency for Research on Cancer (IARC) said that glyphosate is “probably carcinogenic.” (This puts glyphosate-based herbicides in the same category that also contains red meat.)

This flies in the face of previous conclusions by research agencies such as the U.S. Environmental Protection Agency (EPA) and the European Food Safety Authority (EFSA). Their conclusions were that glyphosate is NOT LIKELY to pose a cancer risk to humans.

This issue is being hotly debated in the courts at the present time with lawsuits being brought against Monsanto by those who believe that it caused their cancers.

Mass protests erupted in Europe last November after the European Commission, following much discussion, reluctantly granted a five-year extension for the license to use glyphosate in agriculture in the E.U. This action ignited similar concerns in the United States.

Does Roundup cause neurodegenerative diseases?

Much more research is needed to document a suspected link between pesticide exposure and the risk of developing some of the neurodegenerative diseases such as Alzheimer’s disease or Parkinson’s disease.

When a person with particular genetic risk factors encounters something in their environment like a pesticide that inhibits mitochondria, then those things together could start a neurodegenerative process and could definitely be a risk factor.

So what can you do?

Glyphosate has a density of 1.704 grams per milliliter at 20 degrees Centigrade. (This means that it is 1.7x as heavy as water.) At room temperature, it is a white crystalline powder with a melting point of 184.5 degrees Celsius (or 364.1 degrees Fahrenheit). It does not have a boiling point but rather a decomposition temperature or point of 187 degrees Celsius (369 degrees Fahrenheit).

Glyphosate is very soluble in water at 1.01 grams per 100 milliliters of water. Boiling alone does not remove glyphosate. Because the melting point and decomposition points of glyphosate are both considerably above the boiling point of water, as mentioned above, it will end up being concentrated during the boiling process, making it even worse.

Get Your AquaNui Water Distiller Now

Do you have questions? Comment below and we’ll get answers from Eldon!