For decades, farmers, lawn care workers and professional green thumbs have relied on the popular weed killer atrazine to protect their crops, golf courses and manicured lawns. But atrazine often washes into water supplies and has now become among the most common contaminants in American reservoirs and other sources of drinking water. Current research suggests that atrazine may be dangerous at lower concentrations than previously thought.

Recent studies suggest that, even at concentrations meeting current federal standards, the chemical may be associated with birth defects, low birth weights and menstrual problems.

An investigation by The New York Times has found that in some towns, atrazine concentrations in drinking water have spiked, sometimes for longer than a month. But the reports produced by local water systems for residents often fail to reflect those higher concentrations. Officials at the Environmental Protection Agency say Americans are not exposed to unsafe levels of atrazine. They say that current regulations are adequate to protect human health, and that the doses of atrazine coming through people’s taps are safe — even when concentrations jump.

But some scientists and health advocates disagree. They argue that the recent studies offer enough concerns that the government should begin re-examining its regulations. They also say that local water systems — which have primary responsibility for the safety of drinking water — should be forced to monitor atrazine more frequently, in order to detect short-term increases and warn people when they occur. 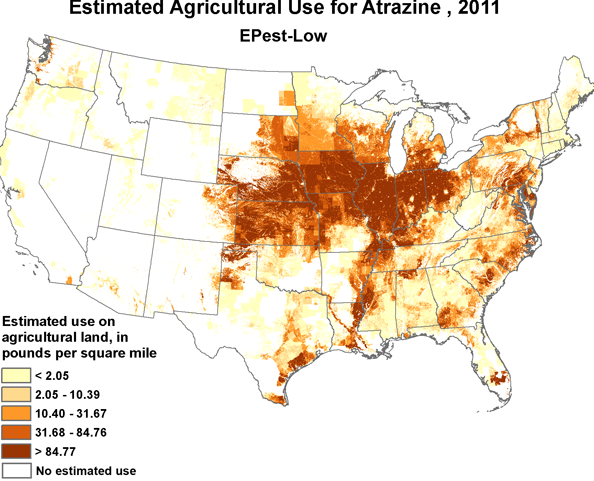 The E.P.A. has not cautioned pregnant women about the potential risks of atrazine. The EPA say Americans are not exposed to unsafe levels of atrazine. Some Scientists and health advocated disagree.

Interviews with local water officials indicate that many of them are unaware that atrazine concentrations have sometimes jumped sharply in their communities. But other officials are concerned. Forty-three water systems in six states — Illinois, Indiana, Iowa, Kansas, Mississippi and Ohio — recently sued atrazine’s manufacturers to force them to pay for removing the chemical from drinking water.

Some of the current regulations governing atrazine in drinking water were established in the 1990s. Critics say that science has changed since then — but that the regulations have not. In particular, some scientists worry that atrazine may be safe during many periods of life but dangerous during brief windows of development, like when a fetus is growing and pregnant women are told to drink lots of water.

“There are short, critical times — like when a fetus’s brain is developing — when chemicals can have disastrous impacts, even in very small concentrations,” said Deborah A. Cory-Slechta, a professor at the University of Rochester in New York.

3 ppb of atrazine in drinking water is what the EPA determined in 1992 would be likely to cause no adverse health effects. However, research by Dr. Tyrone Hayes shows “effects of atrazine on sexual development in African clawed frogs” at exposure levels of 0.1 to 1 ppb.

Let us face it. Government officials cannot react and instantly solve your water problems. But you can be in control. Why would you want to have any level of Atrazine in your water during any period of your life? There is no reason to expose your family to any form of contaminants found in water. We have tested our distillers against Atrazine. The Result? 99.9% pure fresh distilled water. A carefully designed, well-engineered USA Made distiller such as AquaNui will do the job. Why not start taking control now, visit our website and customize your distiller. We are the only distillation company that allows you to build your distiller online. We know you want the highest purity for you and your loved ones and you can achieve that with a premium AquaNui distiller!