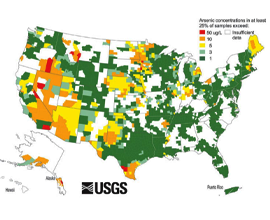 Is There Arsenic in My Drinking Water?

High levels of arsenic in drinking water can lead to severe health problems long-term. Well owners must be extra vigilant as arsenic has no color, taste, or odor. Well water quality can vary from location to location, so it is essential to test well and not assume anything. It is not only well owners that must be aware of arsenic.   It is believed that 10% of wells and public water sources have higher levels of arsenic that are known to cause disease.

The US has areas of high arsenic concentrations according to the map from the United States Geological Survey.  Arsenic is widespread throughout the USA and certain regions in the western USA have levels higher than the EPA maximum allowable levels.  A quick look at the map shows clearly that states like Maine, Nebraska, California, Minnesota, Nevada, Arizona, Utah, Oregon, Montana, Indiana, and Texas all have large areas with arsenic present.

According to the EPA’s website http://water.epa.gov/lawsregs/rulesregs/sdwa/arsenic/index.cfm “….non-cancer effects can include thickening and discoloration of the skin, stomach pain, nausea, vomiting; diarrhea; numbness in hands and feet; partial paralysis; and blindness. Arsenic has been linked to cancer of the bladder, lungs, skin, kidney, nasal passages, liver, and prostate.”

Is There a Safe Amount of Arsenic in Water?

In 2001 the EPA revisited the arsenic problem in the USA and revised downward the arsenic standard for drinking water to 0.01 parts per million (10 parts per billion) to protect consumers served by public water systems from the effects of long-term, chronic exposure to arsenic.  Some municipalities are not in compliance with this standard.  According to the USGS, it is believed that over 2 million well owners are drinking water with higher than recommended levels of arsenic!

How to Remove Arsenic from Water