“At the dawn of the 21st century, much of our drinking water infrastructure is nearing the end of its useful life”, according to the ‘2013 Report Card for America’s Infrastructure’ issued by the American Society of Civil Engineers (ASCE).  Public drinking water systems degrade over time and most of their components have an

average life ranging from 15-95 years so many of these pipes, especially in older areas of the country, are in need of replacement.  It has been reported that there are over 240,000 water main breaks in the US every year.  According to the American Water Works Association (AWWA), replacing all the pipes throughout the nation would take decades and cost over $1,000,000,000,000.  If repairs are not made to the damaged pipes however, they could break and cause interruption in water supply, water shortage, and damage to other infrastructure such as roadways and interfere with emergency response vehicles.

There are a couple of other aspects about aging infrastructure that will affect us too.  When water runs through pipes that are degrading 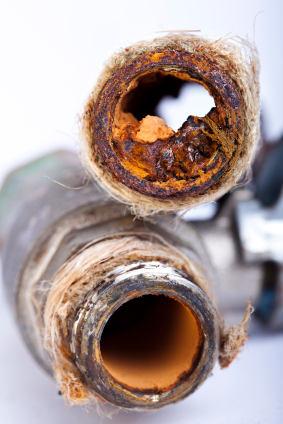 or dissolving, it can cause water loss and contamination.  At a time when water shortage has become a serious topic in many parts of the country, the government doesn’t want to be losing water, especially after it’s already been through the treatment process, as this does not make sense economically.

Water contamination is an issue too.  Provided your water comes from a city supply, it is initially purified at a treatment plant and then pumped through pipes to your home.  If your city has older pipes, your tap water could be picking up pieces of rust, lead, copper and other metals.  There is a possibility of contamination along the way.  For students and staff

at Monroe County Community College (MCCC) in Michigan this is a common problem that they’ve been dealing with for years.   Monday mornings or after holiday breaks, they have to flush the system, meaning they turn on all the taps and let them run for about 15 minutes (wasting countless gallons of water!)  They do regular testing for certain contaminants and the water passes so it’s considered safe, but still most students and staff bring their own water to campus.

Likewise in a home, it is up to each family to protect themselves with their own in-home water purification system.  A US-made Pure Water™ or AquaNui™ distiller is the single most effective way to remove contaminants from your water.  It is going to remove any metals added by the aging pipes and it will kill and leave behind any bacterial or viral infection that can arise in a water supply.  A distiller is peace of mind that you and your family are being protected from these contaminants, whether you have new pipes or not.