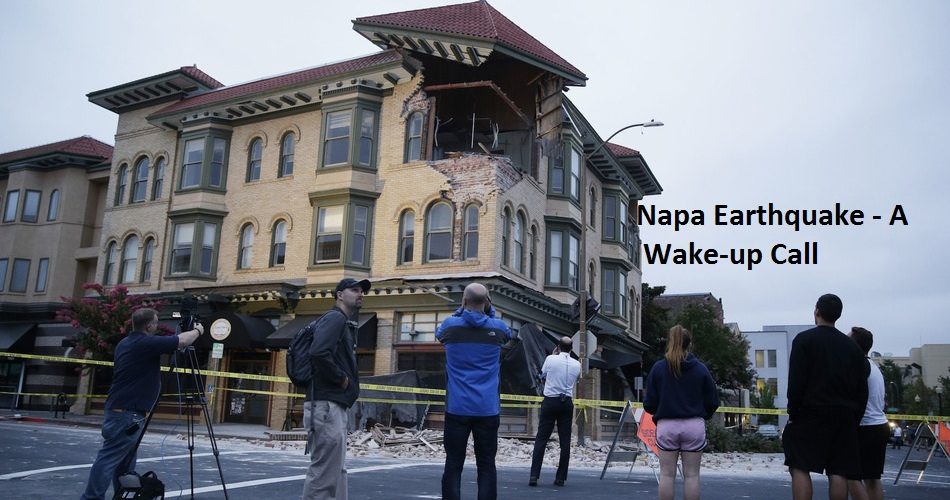 The 6.0 magnitude earthquake that had its epicenter near Napa, California struck in the wee hours of Sunday morning.  Thankfully the time of day resulted in many fewer injuries.  Had this occurred during the “shopping hours” there would have been thousands of people out on the streets, where facades from buildings came crashing to the sidewalks.  Even so, scores of people have been treated at local hospitals. You may have seen the mobile homes on fire on television.  Typically a fire could be extinguished quickly.  However, earthquakes not only damage structure above ground they can also destroy buried infrastructure like gas and water lines.  In Napa it disrupted both.  The gas line ruptures resulted in fires, and the water line ruptures meant there was no water for firefighters to extinguish the flames. If you install the app QuakeWatch, or others like it, you can see the earthquakes that occur globally each day.  There are hundreds every day of

The video explains the reason why earthquakes warnings cannot get better. If a major quake was to hit Los Angeles, San Francisco or Seattle there could be major issues resulting from the infrastructure destruction.  This would make getting a supply of drinking water rapidly to all citizens very difficult, if not impossible. Water is essential to life.  We can only live for a matter of days without water and consuming biologically contaminated water potential can be deadly.  Every family should be prepared.  Federal and State governments recommend that every family have at least 3 days of water stored for an emergency. One way to do this is with an AquaNui distiller with a 15 gallon stainless steel storage tank, shown at www.MyAquaNui.com. Why is the size of the tank so important?  If the water supply is cut off, you may not have water from the tap to treat with a filter, reverse osmosis system or even a distiller.  It’s the water in storage that will sustain your family.  15 gallons of water from your AquaNui distiller could be a life saver and because it was created with a distiller, the water will be of exceptionally high purity.