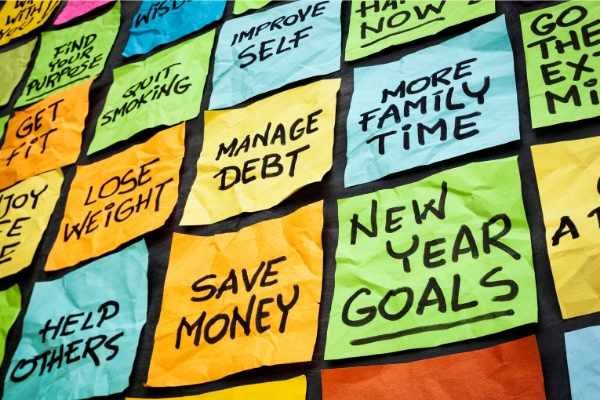 You see it every year.

Family, friends, coworkers, neighbors… all of them vowing that this year, their New Year’s Resolution is going to stick.

He says he’s going to lose a bunch of weight.

She says she’s going to quit biting her nails.

They say they’re going to save money for that trip to Mexico instead of just putting it on the credit card.

But how many people actually follow through with their New Year’s Resolutions?

Sounds depressing, right? After all, if over half of New Year’s Resolutions fail, should you even try to make your own?

YES! Yes, you should!

Did you know that people who make resolutions are about 10x more likely to be successful in making changes than people who just have a goal?

So what’s the secret? What’s different about people who keep their resolutions?

People who keep their resolutions have a few things in common.

First, they keep their resolutions realistic.

I wish I could just “resolve” to win the lottery, get a 6-pack in 4 weeks, learn a dozen languages, and finally travel around the world this year. But that’s not going to happen.

It’s much more realistic to say something like “I’m going to save $10 extra each week by packing my lunches instead of eating out.”

It’s manageable. You can do that. You’re not rushing around trying to do a million different things, losing focus, and dropping the ball because it’s too much. You’re not getting discouraged because it’s overwhelming.

Second, they are motivated by the “why” behind the resolution.

It’s a lot easier to work hard when you really know the reward that is coming and what the reward means to you.

It’s the difference between “I’m going to save $10 a week” and “If I save $10 a week, I’ll be able to take a relaxing Christmas vacation to the beach I’ve always wanted to visit.” The latter gives you a reason to keep going.

Third, they set themselves up for success.

It’s hard to stick to your diet if you’re surrounded by donuts – so don’t do that!

With every resolution you make, think about how you can set up your environment to make it easier. For instance, smokers who want to quit often throw away their lighters and ashtrays. The harder it is to stick to the bad habit, the easier it is to make new ones!

Even if you have a slight setback, don’t give up! You can get back on track in no time. The most successful resolvers keep going even if they stumble.

So what do you say? Are you ready to improve your life?

Are you ready to make a resolution and stick to it?

Great! We’ve put together 3 realistic New Year’s Resolutions that we can help you achieve.